Either way, you were probably exposed to asbestos and now are at risk for mesothelioma.

The exposure occurred because a number of original equipment manufacturers (OEM) and aftermarket automotive parts contained asbestos. Typical parts were:

In addition, the factory where you worked probably contained a large amount of asbestos. The dangerous mineral was used in plant heating systems, electrical wiring, steam and water pipes, and heavy equipment.

Your factory may have also had lots of asbestos dust hiding in nooks and crannies throughout the staging and production floors, as well as the receiving and shipping warehouses.

Your repair shop may have had that same problem.

Asbestos Exposure and How It Happens 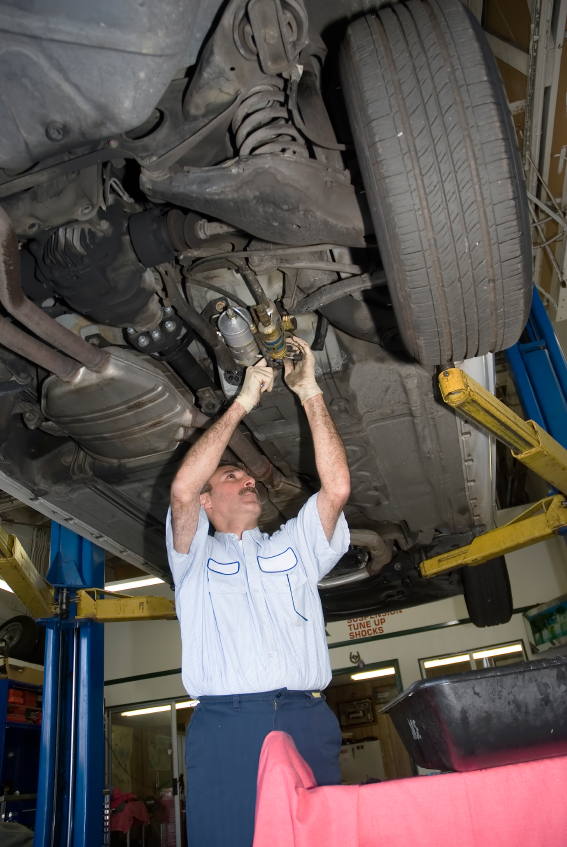 Doing any of those things would have caused the asbestos in them to be disturbed. Asbestos that is disturbed releases tiny particles into the air.

These fibers float because they don’t weigh much. They are impossible to tell apart from dust particles using your naked eye.

But they are very different from ordinary dust particles because they can kill you. If you breathe them in, they park deep inside your lungs and don’t come back out.

After 20 to 50 years, they produce tumors on the thin sheet of cells that lines your lungs.

Manufacturers have for the most part greatly reduced asbestos in automotive parts and materials. But they have not eliminated use of asbestos. It remains a serious health risk for car and truck factory workers and repair technicians.

Labor unions and trade groups serving automotive workers tell their members to wear a respirator on the job. It has to a good one. The fabric facemask that painters use is not good enough to fully protect against asbestos.

Also recommended is the wearing of latex gloves to keep asbestos off your hands. You can swallow asbestos and cause a second type of mesothelioma if your fingers are contaminated and you put them in your mouth.

Mechanics that repair brakes have long been warned never to remove dust from drums, discs, calipers, pads and other system components by blasting them with compressed air. Using a liquid cleaner is urged instead.

Many automotive workers belong to one of two major unions.

People employed at automotive assembly plants and parts factories usually belong to the International Union, United Automobile, Aerospace and Agricultural Implement Workers of America (UAW). It has a membership of nearly 1 million active and retired workers in North America and Puerto Rico.

Repair technicians are often members of the International Association of Machinists and Aerospace Workers (IAM), which has active and retired worker ranks numbering about 700,000 and is drawn from more than 200 industries. The union covers North America.