You build ships for a living — commercial ships that brave all weathers as they carry endless tons of cargo back and forth across the Seven Seas.

Or you build warships — the cruisers, carriers, frigates and tenders that let the U.S. project military might to every corner of the globe.

Whether you specialize in building merchant or Navy vessels, your job in the shipyards means you’ve probably encountered asbestos. As a result, your risk of developing mesothelioma is very high.

If you’ve been exposed to asbestos, it most likely happened because you worked with or near shipbuilding materials and products such as:

Not long ago, the mineral asbestos was as plentiful as steel within the confines of all large shipyards. The reason was that asbestos was seen as every bit as necessary as steel to produce a vessel that could make a lifetime of safe passages over the waters.

Fire aboard completed and commissioned ships is an ever-present danger. Asbestos prevents fire from harming whatever material it’s added to, including steel plates and bulkheads.

Asbestos also keeps the dangerously high heat of pipe-carried steam and machine friction in its place so that crewmen aren’t burned and things nearby aren’t set afire or melted. Asbestos also blocks the corrosive effect that salt air or spilled chemicals have on ship exterior and interior surfaces.

In short, asbestos is a wonder mineral. In truth, however, asbestos has a fatal flaw. It kills. 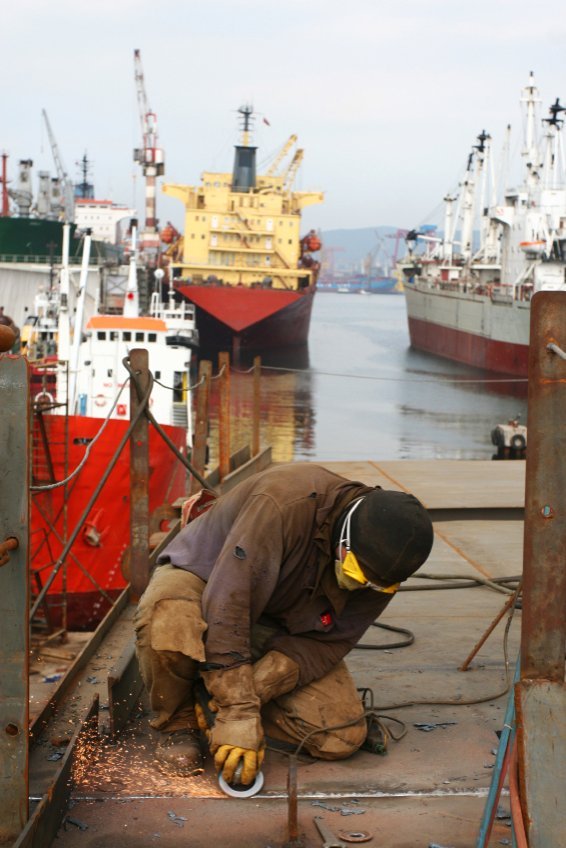 Asbestos is safe as long as it stays out of your lungs or digestive system.

That sounds easy enough to accomplish. But it’s actually very difficult to avoid inhaling or swallowing the mineral if you work in a shipyard.

Very fine particles of asbestos are expelled into the air as you and your co-workers around the yard cut, drill, hammer, weld, rivet, shape, grind, seal and polish materials containing asbestos.

So the ship takes shape. The hull gradually becomes enclosed. Airborne asbestos inside the enclosed space becomes increasingly concentrated for lack of a way to vent to the outside.

If you spend even a single workday with concentrated asbestos particles in the air around you, you’re all but certain to take at least some of that asbestos inside of you. The only way to stop it is if you’re wearing protective gear.

Once inside you, asbestos begins a decades-long attack against your body that ends with cancer cells popping up on the linings of your lungs or abdomen. The cancer is mesothelioma.

Mesothelioma spreads fast. You could be dead in a matter of months without prompt and proper treatment.

The union you belong to as a shipyard worker knows about mesothelioma and how you get it. The union also knows what the disease does to the human body.

For many years now one shipyard union — the International Brotherhood of Boilermakers, Iron Ship Builders, Blacksmiths, Forgers and Helpers — has been voicing anger over the health dangers of asbestos.

In fact, the IBB’s voice was among those that helped convince the federal government to greatly restrict asbestos use in shipbuilding beginning back in the 1980s.

But despite that, asbestos continues to pose a danger to shipyard workers. This danger is almost exclusive now to workers performing retrofits of ships built before the 1980s restrictions on asbestos went into effect.

And because asbestos continues to create a mesothelioma risk for you today, your union is still plugging away in your corner and fighting to give you the safest work environment it can.

Find out more about your union’s efforts to reduce asbestos risks and prevent mesothelioma.

Contact representatives from your local or reach out to the national headquarters and ask what they can do to equip you for the fight of your life.