The cause of mesothelioma is a relatively simple one. It happens because your healthy cells are affected and damaged by asbestos. These mutations are part of a long slow process, and you probably have no idea that it’s taking place.

The onset of mesothelioma often occurs four or more decades after you have been exposed to asbestos.

Mesothelioma takes such a long time to develop because first the genetic code upon which your body is built must be corrupted.

This corruption transpires very, very slowly. However, once it is completed and the disease begins, your cancer progresses rapidly from that point forward. The sequence of the disease follows these steps: 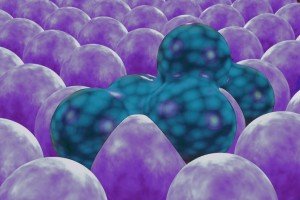 You get exposed to asbestos when you inhale or swallow tiny, carcinogenic fibers of the mineral. This can happen when you’re actually handling or just very near a product containing asbestos. 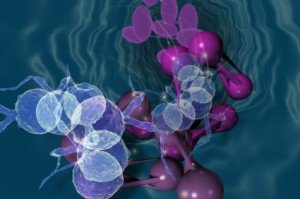 Inhaling or ingesting the fibers triggers an immediate response from your immune system. Your body sends killer cells, called macrophages, to eradicate the fibers. However, since the asbestos fibers are minerals, and not living things, the macrophage attack fails.

That fact does not stop your immune system from trying. Your system continues attacking the fibers.

Some scientists suspect that a byproduct — caused by the never-ending macrophage onslaught — actually enhances the carcinogenic strength of the fibers. This byproduct is called hydroxyl (free) radicals.

Eventually, the asbestos fibers manage to reach inside healthy cells and alter their chromosomes. The affected healthy cells are mesothelials. This is a special type of cell, comprising the thin tissue layers that together form your mesothelium. The mesothelium is the lining over your lungs, abdomen and heart).

For mesothelioma to gain a foothold in your body, the asbestos fibers only need to successfully mutate a single mesothelial cell. When it’s healthy, that cell was programmed to function in a well-regulated manner, according to the American Association for Cancer Research. Getting mutated by asbestos alters its programming, so the cell’s functions spin out of control.

One effect of this is that the cell refuses to shut down and die off. This is what it’s supposed to do if it becomes damaged. Programmed cell death, called apoptosis, doesn’t happen when asbestos mutates the cell.

Not only won’t the damaged cell die, but it also refuses to stop growing. It gets bigger and bigger by sending out a signal to trick the body. The body feeds it more oxygen and blood than is normally allowed.

As it grows, this mutated mesothelial cell replicates itself — and each copy bears the identical asbestos-caused gene damage. The copies multiply at a runaway pace and together form a single tumor.

Neighboring healthy mesothelial cells are in turn corrupted by the mutants. This begins the process of creating another tumor. On and on it continues until a sheet of tumors blankets the entire mesothelium.

The good news is that you cannot pass asbestos-corrupted chromosomes to your offspring.