Line from Asbestos to Mesothelioma Runs Through Pipefitters

You assemble, maintain, dismantle and reassemble systems that carry super-hot liquids or gases around buildings and vessels.

It’s work that brings you into contact with lots and lots of asbestos-containing materials and products such as:

The contact you have with these materials is frequent. For that reason, you are at risk of developing mesothelioma.

Your risk of being stricken by this cancer is moderate to high. The highest risk comes as a result of working on systems built before the early 1990s. 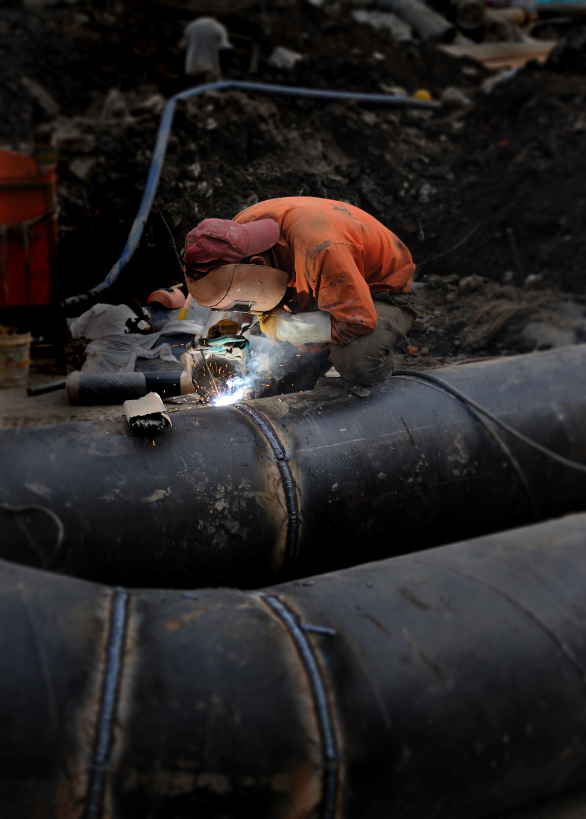 Asbestos serves the purpose of containing heat but also of making some materials — such as cement — stronger.

Asbestos is a mineral. It was and still is plentiful and easy to extract from the earth. Those two attributes kept the price of asbestos low.

Unfortunately, the cost of asbestos turned out to be unacceptably high, if you add up the lives it has destroyed.

But because asbestos is economical and very effective at containing heat, it made sense at one time to use it extensively in pipe infrastructure and systems.

It also made sense to use it extensively in the structural environments containing those pipes, as well as boilers, radiators and other components making up the systems.

In the past, you would encounter asbestos whenever you installed a heat-carrying pipe or duct system. After fitting the pipes together, you or someone else would encase them in insulation. This insulation would have been prepared from a mixture consisting in part of asbestos.

The insulation might be painted on over the pipes. Or it might be sprayed on over them. Painted or sprayed, the insulation would have to be reapplied if the pipes on which it had been overlaid were removed and replaced during inspection, maintenance or repair.

In older structures, chambers and rooms through which pipes pass or which house a boiler usually contained asbestos as a fire-prevention measure. Also, that boiler — and other heat-generating components plugged into the pipe system — would contain asbestos of their own.

In other words, asbestos can be seemingly everywhere.

That’s no longer true of pipe or duct infrastructure and systems erected after the 1990s. The federal government took steps to curb asbestos use, and manufacturers have turned to asbestos alternatives.

Why Asbestos Poses a Danger

Asbestos is not a danger to you until it is inhaled or swallowed. The chances of one or the other occurring are slim if the mineral is not floating in the air.

Asbestos gets into the air either at the time insulation is applied to the pipes or when tear-down is performed in the course of inspection, maintenance, repairs, reconfiguration or replacement.

Anything that disturbs peacefully resting asbestos is likely to expel the stuff into the air. Asbestos can be disturbed if you cut, unfasten, drill, hammer, file, scrape, grind or in any way jostle a pipe section coated in asbestos insulation.

Asbestos particles released into the air don’t stay afloat forever. But they can remain airborne for days on end.

They can easily be put back into the air after they settle if you come along and step on them. Even the slipstream you create by walking past a collection of asbestos particles can stir them back up.

Once in the air, it’s entirely too easy for the asbestos particles to get inside your body. If you breathe them, they will drop into your lungs and stay there for the remainder of your life.

Decades will go by. You’ll think everything is fine. Then, one day, you’ll realize you have a cough that won’t go away. Or your chest hurts in a strange way.

Those are just a few of the signs of mesothelioma. Scientists don’t understand exactly how asbestos in your lungs causes mesothelioma. They just know that it does.

Your union knows it too. If you’re like many in your trade, you belong to the United Association — the Union of Plumbers, Fitters, Welders and HVAC Service Techs. The UA — boasting more than 370,000 active and retired members — is a good resource to which you should turn for information about asbestos safety.

That’s very good advice because mesothelioma wastes little time trying to send its victims to a premature grave once it starts.